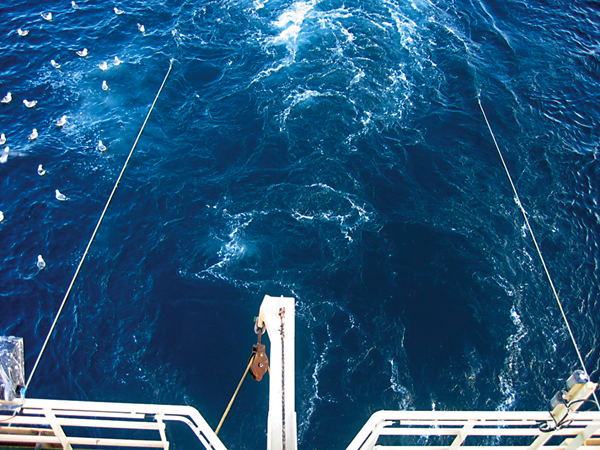 ‘Some people thought we were mad hanging expensive fishing gear on the ends of pieces of rope.’

It’s ten years this month since Guðmundur Huginn Guðmundsson, skipper of Huginn VE 55, took delivery of 2 x 730 metres of 36mm DynIce Warps and tried them out fishing on the surface for mackerel and herring. Hampiðjan provided the warps and Guðmundur Huginn used them until the spring of 2007 when they were replaced by a complete set of 2 x 2000 metres.

‘What is particularly memorable is that we first had the chance to try these warps out on board research vessel Árni Friðriksson during the spring research cruise in May 2006. That was when they were first tested in Iceland.

We did this by adding them to the ends of the trawl warps to see if we could use them without having to take all the wire off the winch drums. That worked without either the DynIce warps or the wire being damaged,’ said Guðmundur Gunnarsson, who heads Hampiðjan’s fishing gear development department.

He explained that it had been due to Guðmundur Bjarnsonar, skipper of Árni Friðriksson and the late Fishery Biologist Hjálmar Vilhjálmsson at the Marine Research Institute that permission was given to test the warps during the research cruise.

Guðmundur Huginn remembers well the changes that took place.
‘We liked the warps right away and the lightness and strength of them took us by surprise Not everyone had faith in the warps and there were some who thought we were mad to hang expensive fishing gear on the ends of pieces of rope, and they weren’t able to trust them not to snap and drop all that gear into the water,’ Guðmundur Huginn said, adding that only once in ten years has a warp parted on board Huginn.

‘The endurance of these warps is exceptional and we have only once replaced our DynIce Warps in ten years. The old ones looked to be fine, but we didn’t dare use them any longer. I upgraded to warps that are 2mm thicker and we have the old warps that we will be able to use for bridles for years to come. Wire is a lot simpler because they rust and you can see right away when they’re worn out. But wire has a much shorter working life than the DynIce Warps.’

The DynIce Warps on board Huginn  have been used mainly for surface fishing and Guðmundur Huginn said that there is nothing unusual about 370 metres of warp being shot for that kind of fishing.
‘We have also used DynIce Warps for fishing in deeper water and when we’re on blue whiting there can be anything between 1100 and 1650 metres of warp out,’ he said, commenting that there was a second leap forward in fishing gear technology when the new DynIce Data headline sounder cable became available.

‘They two work together perfectly as they have the same buoyancy. We always had problems with the wire sounder cable, especially if we took a turn. On blue whiting we’d often find that the sounder cable would sink below the warps, so there was a danger of damage there. This has never been a problem after the DynIce Data sounder cable came along. It looks as good as new and it lasts much longer than the old sounder cable that would last for a maximum of two years.’

Guðmundur Huginn said that the crew’s work on board has been much easier and lighter since the steel wire warps were replaced by DynIce Warps.

‘We reckon that our warps are 22 tonnes lighter than the comparable amount of wire. This makes a big difference as our winches are located high up and at the stern. We find the ship has a better turn of speed, but the effects are more noticeable on slimmer vessels than ours which has a 14 metre beam. Stability is better as the centre of gravity drops, and speed improves. Then there’s the advantage that smaller doors can be used that have the same performance as the larger ones with wire warps. 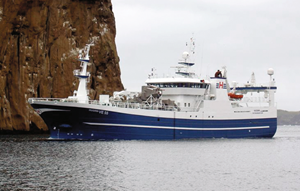 There’s a definite fuel advantage as the doors produce most of the drag in the water,’ Guðmundur Huginn Guðmundsson said, and he estimates that the lifetime of DynIce Warps is at least five years, and even if they are replaced at that time, whether they need to be changed or not, you are left with enough material for a lifetime’s worth of bridles.