DynIce Warps fantastic in the ice 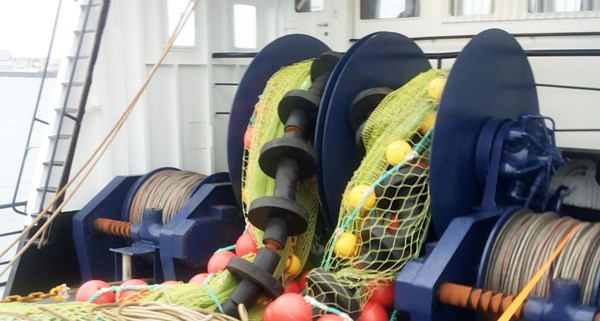 DynIce Warps fantastic in the ice
says Jørgen Eriksen, skipper and owner of Greenland shrimp trawler Claudia.
‘We should have switched to using DynIce Warps long ago. This is the future in trawling, especially under difficult conditions such as those we experience in Greenland in winter,’ he said. He has been using DynIce Warps and the same type or rope for gilsons since August 2012. Before that he used conventional steel wire rope for warps and gilsons, and says that there is no comparison. 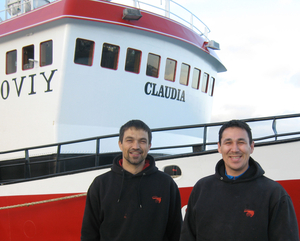 Jørgen was in Iceland recently when Claudia lost power between Iceland and Greenland earlier this month and was towed to Hafnarfjördur. They were steaming home after a long refit in Denmark. As well as routine repairs and maintenance, the opportunity was taken to lengthen Claudia by three metres and now measures 29 metres. A new 1000hp main engine was also fitted to replace the old 700hp engine and two new gensets were also installed. The 1600mm propeller was replaced with a new 2300mm propeller and a new nozzle was fitted. The company has a 1300 tonne shrimp quota off West Greenland, and with additional quota leased from other operators can catch up to 1800 tonnes a year.
He said that at the beginning of the year they took two 915 metre lengths of DynIce Warp.
‘The warps really had to work hard in West Greenland last year. Conditions were difficult with sea ice and icing, and temperatures down to -20°C. We have kept a close eye on the warps and I can confirm that they don’t look any different after being used all winter. Originally we had 30 metres of DynIce rope for gilsons and that’s the same story, it looks as good as new. We had Dyneema gilsons from another manufacturer that lasted only 4-6 weeks, while steel wire gilsons lasted six months. The way the DynIce gilsons have lasted and how they have coped with the winter weather is fantastic. This is the time that we normally replace gilsons. What normally damages them is that water gets inside between the strands and as it freezes, it makes the rope expand. When we haul on them, they go back to their normal diameter, but this creates thousands of tiny ice crystals that are as sharp as knives and they destroy the gilson soon enough. This hasn’t happened with the DynIce gilsons. It seems that the water isn’t able to work its way inside the DynIce gilsons. So now we’ll be interested to see how long much longer these gilsons are going to last.’ Jørgen Eriksen said.

Fuel saving
Jørgen said that they are able to tow faster with the DynIce warps and still save fuel.
‘We had already started to tow faster when we switched to a pair of 6.50m2 Thyborøn pelagic doors that we use to open a 2350 mesh Cosmos shrimp trawl. We’re using roughly the same amount of fuel to cover a larger area and the catch per litre of fuel has increased. Every skipper has his own way of doing things, but it’s clear that now we rarely hit a fastener, which saves us both repair costs and lost fishing time spent fixing the gear,’ he said, and commented that he is looking forward to seeing how their fishing changes with the new engine and propeller. Claudia now has a towing power of around 15 tonnes instead of the 7 tonnes it had before. He said that the arrival of DynIce Warps has made a lot of changes,  but they still have to be careful with the gear in the difficult waters of Disco Bay between Greenland and Canada.
‘Ice forming on the water in winter is the main problem, and not just for us but for bigger vessels as well. We take care to look after the DynIce Warps and keep them as close to the middle gallows as we can, especially when we’re towing in tight conditions in the pack ice. We took the right decision to go for warps from Hampidjan and I certainly don’t regret it. The company’s service has also been excellent, both with upgrading the winches and in the finish on the warps themselves,’ Jørgen Eriksen said