Full trip – and no gear on board 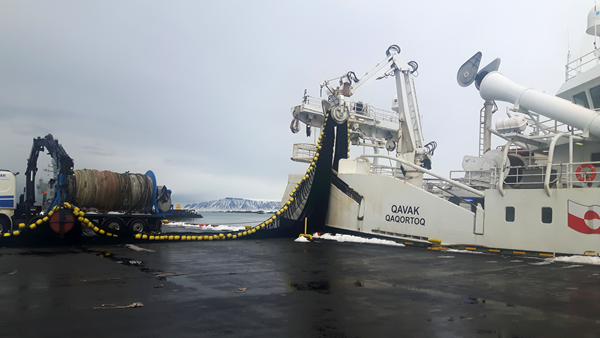 Greenlandic pelagic vessel Qavak is now on its fourth trip on fishing grounds off Snæfellsnes. Its crew of fourteen is partly Icelandic, including skipper Gylfi Viðar Guðmundsson, who is one of the owners of Huginn VE-55 and skipper opposite  Guðmundur Huginn Guðmundsson. Qavak is operated by Greenlandic company Arctic Prime Fisheries aps, which is partly owned by Brim hf.

Gylfi said that until now Polar Amaroq has caught all or most of Greenlands capelin quotas, but recently a 6600 tonne quota was made available for Qavak.

‘We quickly started getting the ship ready for capelin and I took over as skipper, along with two others from Huginn. It’s a fine boat built in 1999 and it used to be Ventla fishing in Norway. It has a carrying capacity of around 1600 tonnes,’ he said. Qavak sailed from Reykjavík with no fishing gear on board and the intention was to steam to Norðfjörður to collect a purse seine. But on the way there was an opportunity to come alongside Huginn off Thorlákshöfn and pump fish on board, so Qavak took 1500 tonnes of capelin on board.

‘We landed the fish in Norðfjörður and then took delivery of our 440 metre long and 110 metre deep capelin purse seine,’ he said.

The second trip was nothing out of the ordinary, but during the third trip off Snæfellsnes, a heavy shot of capelin damaged the purse seine.
‘We managed to pump 500 tonnes on board and then set course for Reykjavík where Hampiðjan’s repair team fixed the gear. Hampiðjan has some fantastic facilities and they were very quick to repair the net. 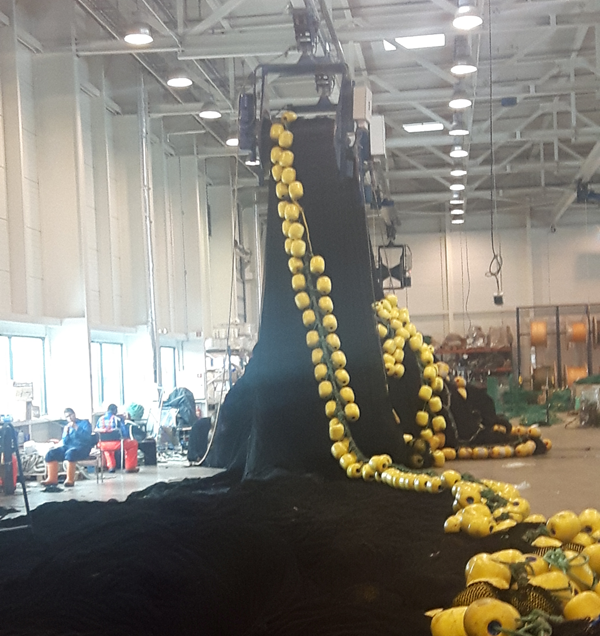 Then we landed our fish at Helguvík  last night and sailed this morning. By midday today we were taking our first shot and it looks like around 700 tonnes. The plan is to fill up as fast as possible and then land our fish. I’m not sure where we’ll be landing, but going back to Helguvík would be best, as it’s close by. After that we should have one more trip, and like everyone else, we’re looking forward to seeing a western migration show up,´Gylfi said.

Gylfi Viðar Guðmundsson is no stranger to Hampiðjan’s products and services, and was one of the first to try out DynIce Warps with great success.
‘The DynIce Warps are pure genius and on Huginn we have only had to switch warps once.The old warps get used for sweeplines and other uses, and will probably last as long as we need them. Now this super-strong DynIce rope is used in all the lines in capelin purse seines and the story is much the same as it was with the DynIce Warps. The purse seines are much lighter and easier to handle, thanks to the DynIce lines,’ Gylfi Viðar Guðmundsson said.