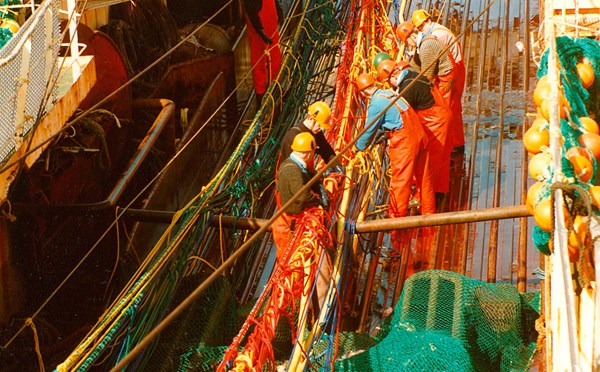 April this year marks a milestone as twenty-five years since the first use of Hampidjan’s Gloria pelagic trawl for fishing redfish on the Reykjanes Ridge south-west of Iceland. Trawlers operated by Hafnarfjördur company Sjóladstödin were the first to try this new trawl design, and the name was coined on board Haraldur Kristjánsson (now Helga María). Hampidjan’s netmakers developed the Gloria in close co-operation with freezer trawler skippers, including Gudmundur Jónsson on Venus, who played a prominent part in the Gloria trawl’s development.
Skipper of Venus until it was laid up in last summer, Gudmundur Jónsson is also a trained fishing gear technologist and was quick to recognise the new possibilities that the Gloria trawl opened.
‘This is probably the single most significant step in trawl gear development, at least as far as the last few decades are concerned. The 1152 metre Gloria was first used in 1989 and we had our first 2048 metre Gloria on board Venus in May 1991,’ he said.
‘The figures refer to the fishing circle of the trawl. Those first trawls were made in twisted PE material and the trawls were no small construction compared to conventional pelagic gears. At the time, most trawlers were using Engel trawls that were made in Germany and by comparison, an Engel trawl’s opening was around the size of the penalty area of a football pitch while the Gloria 2048’s size was closer to three football pitches. The largest meshes in the Gloria trawl were 64 metres in the wings, the front sections and down into the belly.’


Top fishing, one haul at a time
According to Gudmundur Jónsson, the process of getting this giant trawl to work wasn’t an easy one. Venus has a bollard pull of around 31 tonnes, while newer and more modern trawlers could pull closer to 45 tonnes or more. So it was essential that the gear was light enough for Venus to tow.
‘We started using the Gloria in home waters and we fished antastically. The problem was that when we hauled the gear, it got twisted into a mess on the deck and there was no way we could clear the tangle to use the trawl again without cutting it in two. So we had to steam home and clear the trawl in the Hampidjan net loft before we could shoot it again,’ he said, adding that to cut a long story short, he and his crew had to do this four times.
‘It was only because of the patience of the owner, Kristján Loftsson, that this wasn’t just cut short. Kristján was very patient and just told us to go and get the gear squared away ashore, so we did. We worked with Hampidjan to develop a solution to the problem, and this was achieved by using conventional (S-laid) rope in the upper and lower sheets, and rope with the opposite (Z-laid) twist in the side panels. After that, everything worked perfectly,’ Gudmundur Jónsson said, commenting that some regular visits to the flume tank in Hirtshals to test scale models of the trawls were also a key part of the development process.
‘We have to realise that a quarter of a century ago we had very limited opportunities to see just how a trawl performed in the water. The instruments we have today weren’t available then and we didn’t even have sensors to give us the door spread. We had one headline sensor and that was all,’ Gudmundur Jónsson said. 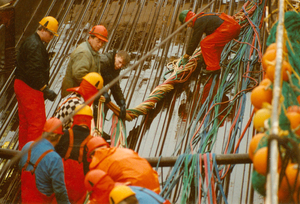 Best trawl for redfish
Eiríkur Ragnarsson was the chief mate and relief skipper on Haraldur Kristjánsson during the original trials with the first Gloria trawls and recounted that he heard a conversation between skipper Páll Eyjólfsson and Hampidjan’s Gudmundur Gunnarsson when the Gloria name was coined, and it should be remembered that ‘Gloria’ is a play on words as in Icelandic it can be either a woman’s name, or else a mistake on a magnificent scale.
‘We’ve been through all kinds of mistakes (Glorias) with this trawl,’ Páll said and Gudmundur’s reply was ‘that’s the name for it.’
Eiríkur Ragnarsson is still on the same ship, although it’s now Helga María now run as a freshfish trawler and he is the regular skipper, and he agrees with Gudmundur Jónsson on Venus that the arrival of the Gloria was a revolution, and not just for the Icelandic fleet.
‘The Russians had been using large-mesh pelagic gears for redfish, so in that respect we weren’t inventing something that hadn’t been tried. The difference was that they had been fishing at 100 to 150 fathoms and we quickly started taking our Gloria trawl  down to 300 and 400 fathoms where we could find the deep redfish that are more valuable than the fish at the upper levels. We started with an 1152 metre trawl and of course there were all kinds of headaches to start with. But we soon got to grips with it and it wasn’t long before there were bigger trawls, all the way up to gears with 3000 metre openings. Today I’d say that the Gloria 2048 trawl is about the best there is for catching redfish. There have been relatively few changes to groundfish gears and the development that has taken place has chiefly been in fishing for pelagic species, and the self-spreading ropes that is now used in these has also made a significant difference in fishing efficiency,’ Eiríkur Ragnarsson said.