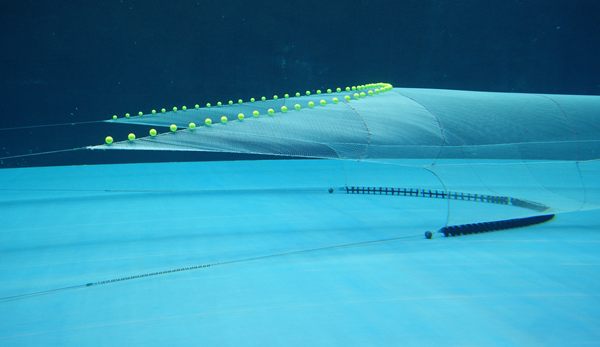 Hampiðjan Iceland's annual gathering at the North Sea Centre’s flume tank in Hirtshals is approaching fast. The trip takes place from 26th to 30th November and according to Managing Director Jón Oddur Davíðsson, this is an interesting coincidence as it marks precisely 40 years since the company organised its first such trip for Icelandic skippers, when the group travelled to the flume tank in Hull.

He said that while he has been busy organising this year’s trip, the final number of participants isn’t yet confirmed.
‘In recent years we have had around fifty people taking part. The majority come from Iceland, but we have also had guests from Russia, the Netherlands, Portugal and further afield,’ Jón Oddur Davíðsson said, commenting that eight or nine Hampiðjan Iceland's staff will attend, as well as two or three staff from partner companies. The aim is, as always, to demonstrate for skippers how their trawl gear performs in the water under the most realistic possible conditions. The flume tank sessions never fail to become an ideal platform for sharing ideas on everything relating to the efficiency of fishing gears and innovations in fishfinding technology.

‘We will be presenting the latest developments in demersal and pelagic trawls, alongside showing gear used in the areas that guests come from. The demersal gear we are demonstrating includes the new Jagger trawl, new arrangements of the H-Toppur, Gulltoppur and 3660-mesh shrimp trawl designs, the Bacalao trawls and a very interesting four panel, triple trouser-codend rigged with DynIce Quicklines,’ he said.

‘The pelagic designs we plan to demonstrate are most of the Gloria Helix designs, including the 2048 m herring and mackerel trawl and the 1760 m mackerel trawl. We’ll be showing the new eight-panel pelagic trawl belly and the T90 mackerel codend with DynIce QuickLines. Also on display will be innovations in the netting and ropes we manufacture.

The team from Thyborøn Trawldoor will be there with us to present the latest in controllable demersal and pelagic trawl doors.

A Simrad representative will be attending, showing the latest in fish gear sensors and fishfinding technology, which closely concerns Hampiðjan, since earlier this year we announced the launch of a revolution in data transfer using a fibre-optic cable for the sensors and fishfinders of the future,’ Jón Oddur Davíðsson said.

Airlines are increasingly strict regarding group bookings being made as far in advance as possible. We request that interested participants take this into account and contact us as soon as possible to confirm participation.

Participants from Iceland will be travelling on 26th November, returning on 30th November. Many of our guests take the opportunity to make use of the weekend to spend time in Copenhagen until 1st December, as Denmark’s Christmas preparations are un full swing at this time of year and the city is festooned with seasonal decorations. There’s always a great atmosphere to these trips, and many guests arrange to meet their partners to spend a weekend city break together.

Hampiðjan Iceland has booked rooms at the Marriott Hotel in the heart of Copenhagen. Those who would like to spend the weekend with us are asked to get in touch and we’ll look after confirming bookings.

We look forward to seeing many participants in this year’s tank trip.
Further information on the trip can be found under the following links: