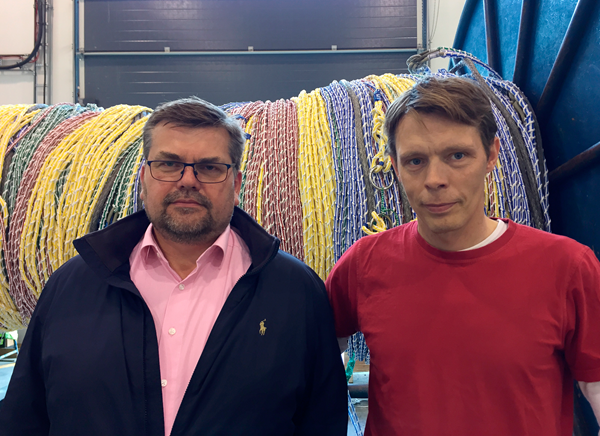 Guðbjartur Thórarinsson and Einar Skaftason have recently joined Hampidjan in management roles.  Einar is responsible for development of new trawl gear and Guðbjartur takes over as the sales and marketing director for of the company’s marine and service division.

Einar is 39, married with one daughter. He trained as a skipper and graduated in 2011 from the University of Iceland with a BSc in industrial engineering. Alongside taking his skipper’s tickets, Einar also trained in fishing gear technology. Before joining Hampidjan he sailed as first mate on vessels operated by Rammi hf in Thorlákshöfn.
‘My role is primarily to develop and design towed fishing gears and the main emphasis at the moment is on the Gloria trawls as there is boom in the development of pelagic gear all over the world,’ he said.

Guðbjartur is 49, married with three children. He also holds skipper’s tickets and qualified in fishing gear technology. He has a degree in business studies from the Bifröst University, where he also completed his master’s degree in international business studies. He worked for Hampidjan eighteen years ago before going to Australia where he skippered trawlers fishing for orange roughy and hoki off Tasmania. From there he went to Marel where he spent eight years, including a spell as the company’s managing director in Slovakia.
‘I’ll be working in Hampidjan’s fishing gear division, and among other things will be concentrating on sales of trawl doors and DynIce Warps, as well as general fishing hardware,’ Guðbjartur Thórarinsson said.