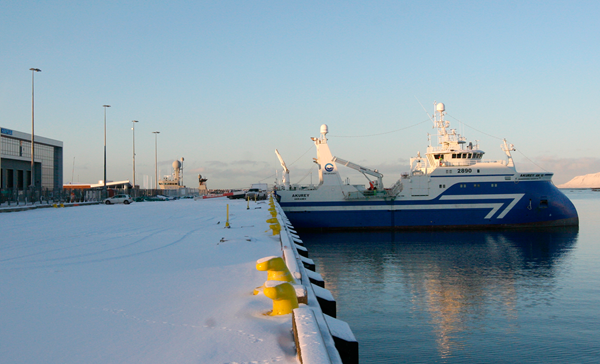 Every trawler crew knows the work that goes into spooling new warps onto the winch drums. Sometimes it can take days before the warps to sit comfortably under tension and there’s rarely a second chance to get things right. The addition of a warp tensioning machine to the Hampiðjan armoury means that these problems are eliminated. 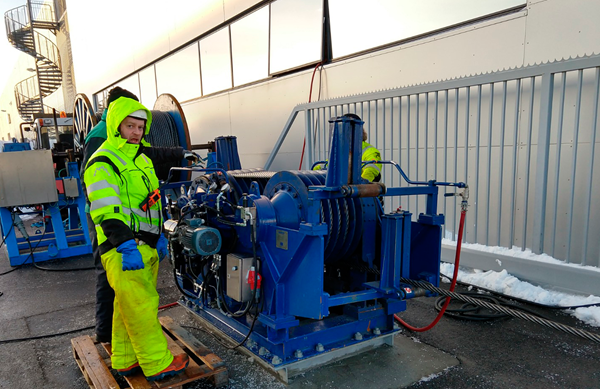 The wire tensioner has been in use in the Westmann Islands for some time and has performed well when the Islands’ trawlers have needed new warps. According to production manager Árni Skúlason, it was also clear that the tensioning facilities needed to be expanded up so that the larger trawlers could also have the benefit of this.
‘Hampiðjan invested both resources and cash into beefing up the tensioning machine so that it could cope with larger deliveries. We had the opportunity to try the new equipment when HB Grandi’s new trawler Akurey arrived to take on new trawl warps,’ he said.
‘It went like a dream. We berthed Akurey with its stern to the quay next to Hampiðjan’s net loft. With the ship in position, we could spool the warps straight onto the drums at a set tension via the tensioning machine, which didn’t give an inch of slack,’ said Akurey’s skipper Eiríkur Jónsson. ‘All I can say is that it was an easy process from start to finish.’
He added that it took around five hours to spool the warps onto the drums. Akurey took 2013 metres (1100 fathoms) of 32mm warp on each main drum.

The Jökull Deeps – the place to tighten your warps
He said that there is no comparison with the way warps have been spooled on board in the past, compared to using the tensioning process as the warps are taken onto the drums.
‘The old way was to winch the warps off the drums on the quayside, and normally a forklift was used to put some weight on the wires to provide some resistance – and we did our best to make sure the wires went as neatly as possible onto the drums,’ Eiríkur Jónsson said.
‘Doing it that way meant that we frequently had to fix the wires as they went on, and there would always be trouble if there was any slack as they were spooled. Wire that’s spooled slack will always have a shorter lifetime than wire that’s spooled under tension.’
He commented that even with the wires on the drums, there job wasn’t finished.

‘Before we could start fishing, we still needed to tighten up the warps at sea and the Jökull Deeps were a popular place for that. Normally we’d hang a weight on the warp ends and shoot all the wire. Then we would haul the warps back with the tension provided by the weights, the wire’s own weight and the water resistance, while we watched to make sure they went onto the drums properly. It didn’t always go well, and it’s important to have the warps spooled properly. If they’re not laid well on the drums, they can be damaged.

So it could take a while to get the warps right,’ Eiríkur Jónsson said, adding that one of the advantages of the tensioning machine is that if something goes wrong on the winch drum, the wire can easily be hauled back and the lay of the wire fixed; something that couldn’t be done before.

Árni Skúlason is understandably very satisfied with the success of the tensioning machine.
‘This was the first time that we have been able to deliver warps using the tensioning system, direct onto one of the larger trawlers, without the machine leaving an inch of slack anywhere as the wires went onto the drums. The system did everything that we expected of it.’
With the ship in position, we could spool the warps straight onto the drums at a set tension via the tensioning machine, which didn’t give an inch of slack,’